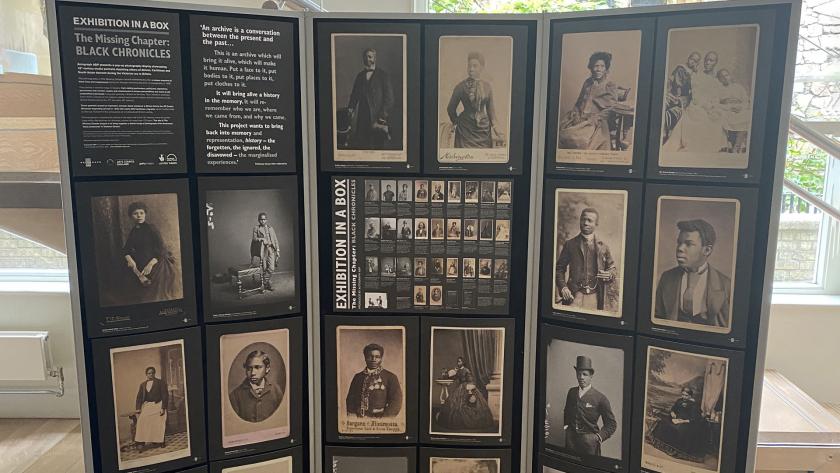 The Missing Chapter: ETT's The Importance of Being Earnest celebrates the forgotten lives of black Victorians

The Importance of Being Earnest is on our stage until 24 September... Alongside the production you can see Autograph ABP's pop-up exhibition, The Missing Chapter: Black Chronicles in our foyer, and you won't want to miss it.

The Missing Chapter: Black Chronicles is an ongoing archival research project aiming to uncover unseen photographs of black people in the decades following photography's birth in 1839. In the pop-up exhibition, you can see fascinating photos of black royalty, politicians, performers, dignitaries, missionaries, and servicemen and women. The photos show well-known personalities from the time, as well as people who are still unidentified.

Raising awareness around the missing history of black people in this era is a key component of English Touring Theatre's production of The Importance of Being Earnest. Oscar Wilde's famous comedy follows a wealthy Victorian family navigating love, class, and some hilarious hiccups (of their own making!) and Director Denzel Westley-Sanderson has set his contemporary version of Wilde's story in a world often overlooked: that of black Victorians.

In an interview about the production, Westley-Sanderson said:

'I was told at school that we came over on the Windrush and that was it. When I started researching black Victorians, it opened up a whole new world. I knew then that I had to keep the setting real. This happened. These people existed.'

Autograph ABP has a similar vision when it comes to their project. Some of the photos they have uncovered have gone unseen for 125 years and by sharing them with audiences across the country, they hope to show the variety of lives black Victorians lived.

Oscar Wilde is a writer often praised for bringing the joy and celebration of LGBT+ experience to light in a time of great societal and political homophobia, and Denzel Westley-Sanderson aims to take this a step further, by casting the entire play with black actors. Though many may only think of the Victorian era in terms of the racism of slavery, this production magnificently shows black people on stage being silly, having fun, and being wealthy. Not only this, but the fearsome and iconic character of Lady Bracknell is being reimagined by Daniel Jacob's drag queen alter ego, Vinegar Strokes (Ru Paul's Drag Race UK).

Through Denzel Westley-Sanderson's direction, he aims to help audiences see the 'messy, classy, gloriously human' experience of Victorian people - not the two-dimensional, stuffy characters we are used to associating with period dramas. Plus, by showing audience a cast of black actors, this production reminds us of the rich, black history which, like The Missing Chapter: Black Chronicles shows us, often goes unnoticed.

You can catch The Importance of Being Earnest at Cambridge Arts Theatre until 24 September. Keep an eye out for our The Missing Chapter: Black Chronicles exhibition in the foyer.