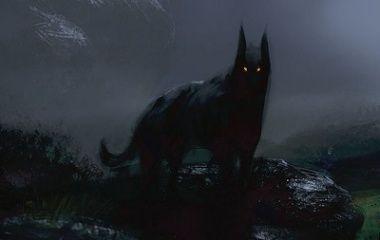 The Hound of the Baskervilles may be closer to home than you think!

Legend has it, the Cambridgeshire fens are haunted by a large, savage bloodhound, and if you lay eyes on him, you will befall a horrible fate within the week. You’d be forgiven for thinking this sounds familiar – supposedly, it was this legend that inspired Sir Arthur Conan Doyle’s famous novel, The Hound of the Baskervilles!

Black Shuck, as our Cambridgeshire hound is known, is said to have flaming red eyes, be as large as a horse, and float on a carpet of mist. His howl can make your blood run cold and brings bad fortune to anyone who sets their eyes upon him. The Hound hunted by Sherlock Holmes and the Baskervilles, although in Dartmoor, is described as a similar spectral being, ‘as large as a small lioness’ with eyes which are ‘ringed with fire’. Just from these descriptions it certainly seems Arthur Conan Doyle’s hellhound could have been inspired by Black Shuck.

One of the most notable reports of Black Shuck is his appearance in Blythburg Church in Suffolk in 1577 where he burst into the nave, mauled a man and a boy, and collapsed the roof of the church. There are still scorch marks on the north door from his visit. Closer to home though, reports of the Hound suggest he is a benign protector, accompanying lone women in the night; one woman reports he escorted her to the main road at Christs Pieces during a particularly dark night. Although some now say his bones were dug up in Suffolk in 2014, there have been many reports of howling coming from the Fens over the many centuries.

If you hear howls on the Fens this week though, it may instead be the Hound of the Baskervilles, back in the land of its inspiration, as Original Theatre begin their UK Tour of the classic detective story this Thursday!

The Hound of the Baskervilles is running from 16 – 18 September, with an age guidance rating of 7+. Book your tickets now!