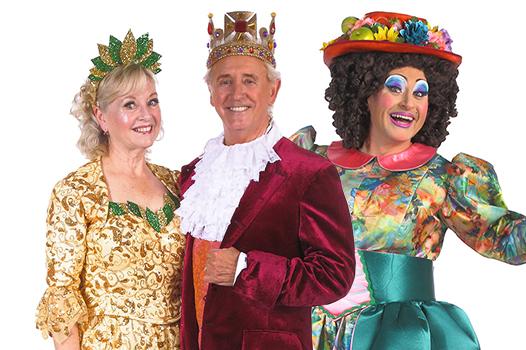 Jack and the Beanstalk Behind the Scenes: Cast photoshoot!

If there's one sure-fire way to get the Arts Theatre team well and truly geared up for the festive season... it's the annual pantomime photo shoot!

Last week we invited a few of the brilliant Jack and the Beanstalk cast to the theatre, stitched them into (very sparkly) costumes and our photographer, Tony Meehan, snapped away.

Chart-topping legend Tony Christie (Is This The Way to Amarillo) will be making his Arts Theatre debut this year as The King... of Amarillo! He is joined by the much-loved Liza Goddard (Bergerac) who brings the sparkling magic as the Good Fairy. You may also recognise two other faces below... as Cambridge's #1 Panto Dame Matt Crosby and Robert Rees are both returning to bring plenty of laughter to our audiences across the panto season!

Joining this fabulous foursome will be Holly Easterbrook, coming back to Cambridge after Dick Whittington to star as our hero Jack Trott, Stephen Beckett as the evil Fleshcreep and Alexandra Waite-Roberts as the beautiful Princess.

Here's some behind-the-scenes shots of what went on, who wore what and which famous faces will be treading our boards this festive season...

Jack and the Beanstalk is on our stage from Thur 30 November 2017 until Sun 7 January 2018. Click here for more information.

Jack and the Beanstalk is proudly sponsored by Laragh Homes, the award-winning Cambridgeshire property developer.