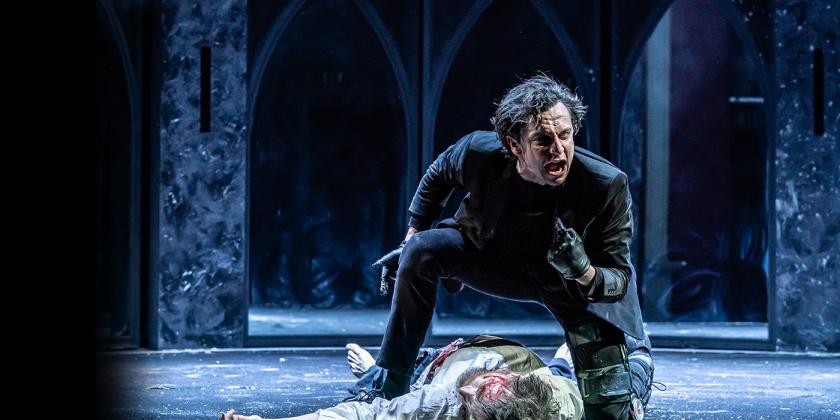 Richard III: Q&A with the star and director.

We speak the director (John Haider) and star (Tom Mothersdale) of Richard III about rediscovering one of Shakespeare’s most famous villains.

What’s Shakespeare’s Richard III all about?

John Haidar: It’s a study of one man’s ambition to be king, how that desire for power is refracted through his family and the country as a whole and how, ultimately, it tears the country apart. This is an ensemble piece where we are creating a broken family on stage.

What drew you to this particular Shakespeare play?

Tom Mothersdale: John and I are really interested in the character of Richard. Rather than just showing you his horrendous acts, we want to question why he does them. What has turned him into this – in the words of other people – monster?

John: I don’t see him as a monster. He’s trying to figure out what he is, but he’s been told his whole life he’s a monster. Maybe he’s decided to fulfill that role. He becomes this emotional extremist in the course of the play. He’s capable of these amazing moments of poetry, but also incredible violence, because that’s the only outlet he has.

How did you create your new version?

John: Firstly, it’s important to say I haven’t changed the Shakespearean text to my own text. It’s been an architectural process, trying to find out how to tell the story most clearly and effectively in a way that feels intimate and streamlined. It’s what Shakespeare intended. But we’re approaching it from a different angle, looking at the same thing.

How are you dealing with Richard’s famous physicality?

Tom: We’ve tried lots of different things. I have scoliosis, the exact same shaped spine that Richard had, so that’s a bonus. You get that for free! He’s called lots of different names in the play. A lot of them are animals. From that you can start to piece together an idea of the physicality.

How are you feeling about touring Richard III?

John: I’m excited. The variety of audiences will be brilliant, but I’m really hopeful that we get a new younger audience who might never have seen this play, or any Shakespeare, and that we might be able to be their point of entry. If we can give that experience to somebody, that would be a special thing.

Tom: There’s also a little bit of nostalgia for us in Cambridge. It’s where John saw me performing in Romeo and Juliet for Headlong. It feels right to be able to go back there together.

Richard III is on our stage Wednesday 24 April - Saturday 27 April. For more information and to book tickets, please click here.